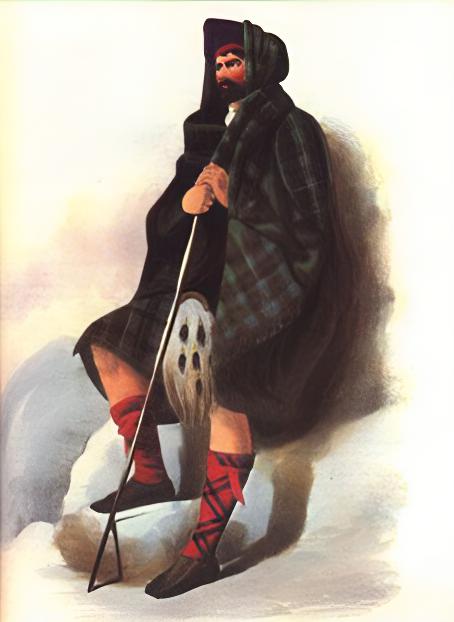 Clan Davidson is one of the major Scottish Clans with an identifiable history going back to at least the 13th century. Davidsons have associations with virtually all parts of Scotland, particularly the central Highlands and the Borders. Clan Davidson fought at Culloden as part of the Clan Chattan Confederation and has played a significant part in Scottish history.

The Historical Committee of Clan Davidson Association UK has done intensive research into the history of the clan and have cast doubt on some of which has at times been held to be Davidson history. Their book “The Davidsons: the Clan, its history and its people” is a full account of their findings and the following has been excerpted from this publication.

The difficulties that face anyone investigating what took place in Scotland in the late 1300s are not only the scarcity of written evidence but that such evidence is mostly versions of events recorded by those who came to power over that time with sometimes their own view of the facts!

No contemporary records of the early days of our Clan have survived. We have to depend on document quoting sources now lost and on orally transmitted traditions first committed to writing some centuries after the events they describe. The earliest reference to the Davidsons, or Clan Dhai, of Badenoch, is in the genealogy of Clan Mackintosh by Lachlan Mackintosh of Kinrara, brother of the 18th chief of Mackintosh.

To quote the Clan Davidson Association historians in a review published in 2004:
“Let us stay then, until proved otherwise, with Clanday [otherwise Clandai or Clandhai] being a branch of Clanchattan descended from David dhu, possibly of Nude, husband or son of Slane Mackintosh, daughter of Angus, chief of Mackintosh and his wife Eva. Let us also accept, at least provisionally, Clanday as a candidate for the origin of at least some present-day Davidsons”.
‍
It is believed that the clan originates in the Highlands in the 14th century in the area of Badenoch, Strathspey and Newtonmore.

When the power of the Comyns began to wane in Badenoch, David Dubh of Invernahavon, Chief of Davidsons, having married the daughter of Angus, 6th of MacKintosh, sought the protection of William, 7th of MacKintosh, before 1350, and Clan Davidson became associated with the Chattan Confederation.

The Battle of Invernahaven in 1370 was an incident in the long-running feud between Clan Chattan and Clan Cameron. Both claimed lands in Lochaber. The Camerons having driven away the cattle of Badenoch, Lachland VIIIth of Mackintosh, according to Kinrara, “immediately pursued, with those whom in so sudden and hasty an expedition he was able to collect, and reached them in flight near the village of Invernahavon, where a fierce fight took place. Victory at first included to the Camerons, who were the greater number, for almost a whole sept of the Chattan, by name the Clan Dai, was utterly destroyed. Whilst these things were being so acted, another sept of the Chattans named the Clan Vurrich (ancestors of Clan Macpherson], who had not joined with those who were fighting, because the Clandai were preferred by Mackintosh to the right wing of the line of battle, withdrew …”

Although the Davidsons are said to have been involved, there is no sound basis that Clan Dhai fought in the Battle of the North Inch of Perth in 1396 and their annihilation at Invernahavon was too recent.

It is most probable that throughout the 1300s, Clan Dhai was a strong clan in Upper Speyside which necessarily owed allegiance to the Comyn overlords.
After the downfall of the Comyns, the Clan bonded itself to and intermarried with the incoming Clan Chattan and was later weakened by clan feuding.

In the 14th century, the adoption of surnames was far from complete. Early records present a problem with the name Davidson as was the case with other patronymic names.
Before surnames came into use, A Donald whose father was David would commonly be referred to as Donald Davidson. If Donald had a son called Finlay, he would be called Finlay Donaldson. It is only when Finlay is recorded as Finlay Davidson, son of Donald Davidson, can we be sure that Davidson is being used as a surname.

In compiling the history of the clan and searching the records of the National Archives of Scotland, the Scottish Record Society and other printed sources, the earliest record found was in 1476 of a John Davidsone, son of the late Gilbert Davidsone.

There were, of course, many men who were sons of David which has been a reasonably common Christian name in Scotland at least since the accession of David I in 1124 and the records show men such as John filius Davidis in Perth in 1219. The form of filius Davidis does not appear after the 1300s.

The surname Davidson has a surprising variety of spellings and the most frequently found nowadays is Davison. In early documents there are many examples of the same person being referred to sometimes as Davidson and sometimes as Davison and of a father being given one spelling and a son being given the other.

So quoting the Clan Davidson Historical Committee: “Although it is most unlikely that all Davidsons are descended from a common ancestor called David, the distribution of the surname Davidson is far from random today and far from random in the historical records. Moreover, it is amazing how early the present-day distribution of the surname in Scotland appears in the historical record. This suggests an affinity between Davidsons greater than can be explained by descent from a random collection of Davids. The evidence is open to several interpretations but is consistent with some of the Davidsons, at least, having originated in Badenoch in the 14th century and having emigrated from there in later times.”